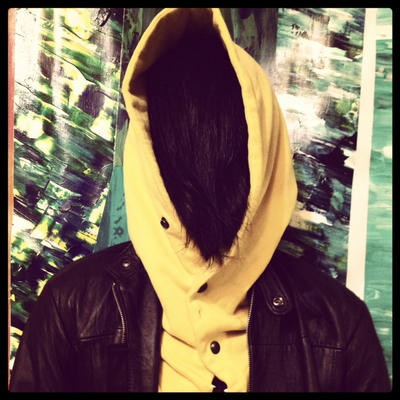 Hello my nAme Is JONJON GREEN by Youta Matsuoka.

enjoy and laugh it off.

When he was little, he already started listening to JAZZ like Count Basie or Dave Brubeck Quartet and also Rock’n Roll like Rolling Stones because of his dad. But he was also into playing around in the forest or river and making his and his friends’ hideout as a little kid. His mom was a painter and she took him to museums and galleries so that he naturally started getting interested in paintings. At that time he was into drawing endless maze and kept doing it with his mom cheering him up. He was also super into basketball for 6 years until first year of high school and busy imitating Michael Jordan. But somehow he joined an art club suddenly. That was a turning point. For school festival he displayed a video of public toilets in Takasaki city and a huge object featuring his complains about teachers. His rebellious spirit came from those days.
After graduating from high school he moved to Tokyo. After a year he entered Tama Art University but he didn’t like circles/clubs there. So he started his own called “Bad Beans” with his friends and they did anything they wanted to do with no rules. Student Association hated them. While learning graphic design, he was into music, booze and weed. He met his best buddy, Michinori Maru and they started this live­painting unit called “MARKHOL”. His live-painting career started there.
During his art college days, JONJON GREEN got influenced by street­related cultures such as beatniks and Graffiti and counter cultures such as Hippy movement and Punk Rock. After graduating from school, he went to travel around Asia and Europe as a backpacker. After coming back to Japan in 2004, he started his artist career including live­painting. Having rebellious spirit resonant with the vandalism of graffiti culture, his style varies from soft to hard and it has sarcastic/satirical taste. Until 2010 he traveled around the cities in Japan to paint walls and his main focus was
live­painting. After that, he switched to making personal art pieces and started having art
shows at galleries and also doing commercial work for big corporation/companies.
His recent works are in the same direction as his “SCENES” series in 2012 but they have got much more minimal for screen structure with various materials. The abstract scenes
are cut into comic­style segmentation. This sense of spaces and minimalism is pretty characteristic of Japanese artist. But JONJON GREEN also has been taking influences from overseas cultures, so the style is his original in the end.
He doesn't see himself as a street artist, but as a contemporary artist. His art would make you think about the concepts and feelings behind. His works can be called “Mixture Art” as they are made with many different materials like acrylic, oil, watercolors and etc. Also because of the complicated segmentation, there are so many layers in his art. It could be abstract and concrete at the same time and you will be amazed and confused by his daydreaming wonderland.